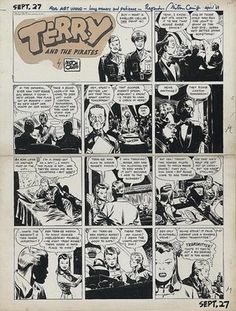 Terry and the Pirates was an action-adventure comic strip created by cartoonist Milton Caniff, which originally ran from October 22, 1934 to February 25, 1973. Captain Joseph Patterson, editor for the Chicago Tribune New York News Syndicate, had admired Caniff's work on the children's adventure strip Dickie Dare and hired him to create the new adventure strip, providing Caniff with the title Author(s): Milton Caniff (1934–1946), George . Terry and the Pirates is an American comic strip that originally ran from October 22, 1934, until February 25, 1973. The daily and Sunday strips ran separate storylines until August 25, 1936. A revival series (re-imagining the strip and setting it in the current day) ran from March 26, 1995, until July 27, 1997.

Terry and the Pirates was an action-adventure comic strip created by cartoonist Milton Caniff. The daily strip began October 22, 1934, with the Sunday color pages beginning December 9, 1934. Initially, the storylines of the daily strips and Sunday pages were different, but . A classic adventure comic strip, Milton Caniff's Terry and the Pirates. Caniff's masterful work on Terry garnered him the very first Cartoonist of the Year award in 1946 as well as the nickname "the Rembrandt of the comic strip."5.5/10(6).